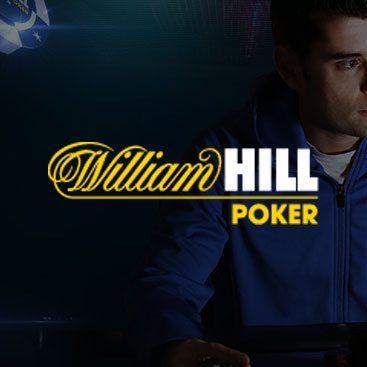 While we all know that brand names aren’t everything, it’s nonetheless difficult to hear of a name like William Hill Poker and not instinctively believe it is going to be about as good as it gets. These guys have been doing what they do longer than most other online gambling brands combined, so you’d be forgiven for assuming that when it comes to poker, they wouldn’t be able to put a foot wrong. Is this the case? Let Casino Papa guide you through the details!

Overview
Over recent years, William Hill Poker has established a relatively sizeable reputation for being the ideal poker room to head for those looking to take advantage of dim-witted newcomers. Why? It’s simple really – William Hill Poker is tidying up with the rest of the various William Hill online gaming assets including their poker app, making it extremely easy for those into sports betting, bingo and other casino games to head over and try their hand poker. Needless to say, given the fact that many of these will have been successful in the prior exploits means they have a habit of getting carried away when experimenting with poker for the first time. This in turn amounts to rich pickings for those on the lookout for unwitting fish – something that has made William Hill Poker quite rightly famous!

Site Summary
One of the things we really, REALLY like about William Hill Poker is the overall design and layout of the site. The trouble being that if you were to ask as why, we’d have trouble explaining it! It’s hard to put your finger on, but while there are so many poker rooms and services up and running these days that feel somewhat forced, fabricated or gimmicky, William Hill Poker is in fact the exact opposite. From the colour scheme to the designer of the lobby to the gaming tables themselves, the whole thing smacks of the kind of professionalism we love.

Sorry if that’s a bit vague, but check it out for yourself and you’ll see what we mean!

Getting the sticky subject of bonuses out to the way first of all, it’s the usual case of the less said, the better. Not that offering a match bonus of up to £1,200 on initial deposits isn’t generous, but you will be required to spend a hell of a lot of your own money in a short period of time for it to be of any real use to you. That being said, you do at least get a few loyalty points when signing up and an entry to a freeroll competition. Just for the record, while on the subject, William Hill Poker does NOT make it easy to access the terms and conditions attached to its bonus offers.

Away from all at unpleasantness now, William Hill Poker is part of the iPoker Network which in turn guarantees consistently strong performance and an extremely robust platform. Contrary to expectations however, play traffic at William Hill Poker when compared to its closest rivals really isn’t anything to write home about. In fact, analysis suggests that player numbers generally tend to peak below the 4,000 mark and can be considerably lower during off-peak hours. Compare this with the 35,000+ you might see online at any one time at Ladbrokes or the 10,000 and Paddy Power and the difference becomes clear.

From our own personal experience however, this seemingly disappointing traffic cannot realistically be attributed to the quality of the poker offer. Instead, it’s most likely a case of the popularity and fame of the other sites stealing the lion’s share of interest. As such, the action at William Hill Poker tends to be relatively soft and as already mentioned, it’s a popular place to head for a spot of fishing.

In terms of standout features, Speed Poker is absolutely brilliant for those who don’t wish to waste time on bum hands and despite the fact that player numbers at William Hill Poker aren’t the largest, the constant assortment of tournaments and competitions is right up there with the best of them. There’s even a £250,000 Sunday jackpot to play for, along with a variety of other life changing jackpots.

On the whole therefore, there’s plenty of reason to give William Hill Poker a shot, though chances are you will not find anything particularly out of the ordinary to write home about. The mobile app is pretty fantastic, but the lack of Mac and Linux support for the primary desktop download really could do with being sorted out.

Best Features
As we’ve already mentioned on more than one occasion, the single best feature presented by William Hill Poker as far as we’re concerned is the overall design and layout of the site. We’re still having trouble putting our finger on exactly why, but we love it!

Conclusion
It would be difficult not to fairly and quite rightly give total recommendation to William Hill Poker as a site and service that is definitely worth trying out. It isn’t perfect, it doesn’t attract traffic in enormous volumes and software compatibility can be a problem. If you can see past these many criticisms however, quite literally everything else that’s on offer is solid and dependable in every way.

15 Jackpot Mobile Casino reviewVisit Website Read Review
We use cookies to ensure that we give you the best experience on our website. If you continue to use this site we will assume that you are happy with it.Ok
Agree Decline