The Traits That Separate Poker Players from Blackjack Players 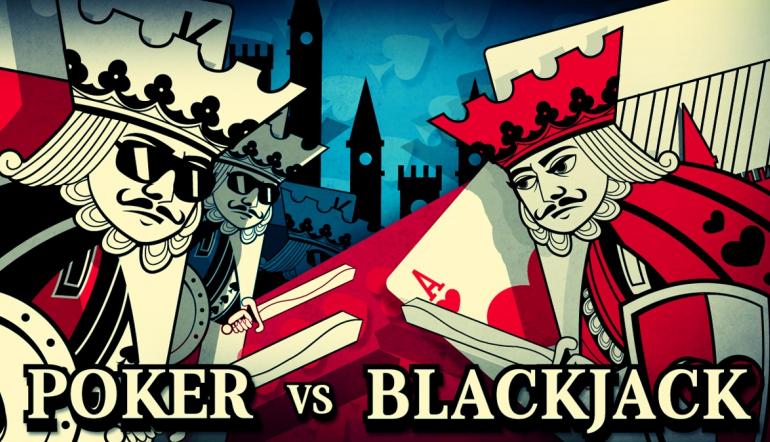 Mention casino table games to just about anyone and the first two that spring to mind are poker and blackjack.

Popular culture has painted an appealing (if slightly misleading) picture of how these all-time classics play out. One of many factors that have contributed to the immense popularity of both games over the years.

Quiz most casino regulars on their preferred games and chances are they’ll play a fair amount of poker and blackjack while doing their rounds. Elsewhere, you have a slightly smaller subgroup who stick primarily (or exclusively) with one of the other.

This is where things get interesting, as the personalities and traits of these two groups of gamblers are quite different. While blackjack and poker may share many similarities, the people who play them aren’t as alike as you might think.

To illustrate the point, here’s a brief rundown of six traits that separate poker players from blackjack players:

Playing poker successfully means being flexible enough to adapt to every possible scenario. Things often change at the flick of a card, which means you need to adjust your strategy and mindset accordingly. Stick too rigidly to the same strategy for too long and you are guaranteed to lose.

This differs significantly from blackjack, where staying true to your chosen strategy is essential. Changing things up too much when playing blackjack is a sure-fire recipe for disaster. Once you’ve found a strategy that seems to work at the blackjack table, you should not deviate from it.

Whereas with blackjack, the ability to switch seamlessly between any number of strategies in an instant is often what separates the pros from the amateurs.

With both games, you’ve technically no way of knowing for sure what’s coming next. However, blackjack players who are numerically and mathematically minded can try their hand at card counting. Something a surprising number of blackjack players do, most of whom are unsuccessful.

In any case, the key to getting ahead of the house edge lies in learning how to count cards. Something that requires outstanding numeracy skills and a photographic memory. Neither of which are necessary at the poker table, card counting really doesn’t come into play.

You’ll therefore often find that those who excel at blackjack are more mathematical in nature than their poker playing counterparts. There’s a degree of overlap, but this is usually how it goes.

Again, there’s overlap here – it’s not to say for a minute that blackjack players are generally antisocial. Far from it, as there’s usually plenty of activity taking place at the blackjack table.

Even so, poker players are inherently more social creatures, given the social nature of the game. If you spend a lot of time playing poker and make it your game of choice, you clearly enjoy spending time with a group of all players. Playing poker alone online against the machine is an option, but tends to be far from satisfying.

Poker by its nature is an extremely social game, where the social aspect is a major part of its appeal. With blackjack, it’s often a case of enjoying a spot of quiet solitude, which is also fine.

Nobody likes to lose, irrespective of the games they play. The difference in this instance is that with poker, you’re fighting tooth and nail to outwit and financially batter a bunch of other people. With blackjack, you’re technically only ever playing against a deck of cards.

Hence, even when poker players are obsessed with winning (and can’t take losing), this still doesn’t qualify as ‘competitive’ in the traditional sense. Over at the poker table, anyone who is not extremely competitive should probably rethink their casino game of choice!

5. Poker Players Are Happy to Play for Fun

The vast majority of poker games that take place in the real world involve little to no money. Most people playing with home poker sets use nothing but chips as currency. Perhaps with a modest combined prize pool in some instances, but rarely a lot.

There’s something about poker (i.e. the competitiveness) that makes it enjoyable to play, even with no money on the line. With blackjack, remove the cash from the equation and the whole thing suddenly seems pointless.

Even if they don’t admit it, at least 99.9% of the people who play blackjack do so specifically with wins in mind. Elsewhere, quite a lot of poker players would admit they’re completely rubbish and fully expect to lose. Yet they still play, for the simple fun and enjoyment of it all. An interesting difference in perspective and priorities, though again with a certain amount of overlap to factor in.

Last up, there’s a tendency at the blackjack table to blame losing streaks on anything and everything but yourself. Understandable and logical to an extent, given how the game in its entirety is based on pure chance. Shy of card counting, there’s almost nothing you can do to predict the outcome, meaning it’s all in the hands of fate.

When things go wrong, it’s natural that a blackjack player blames sheer bad luck. Even if their own hapless play was the cause of the loss, it’s fate that gets the blame. With poker, those who truly understand the game know they’re in control of their own destinies. At least, to such an extent as to know when to hold, know when to fold and know when to bet the farm.

One of the hallmarks of a good poker player is always accepting the result for what it is. Where a poker player blames fate or bad luck on the outcome, they’re acknowledging their own inexperience.