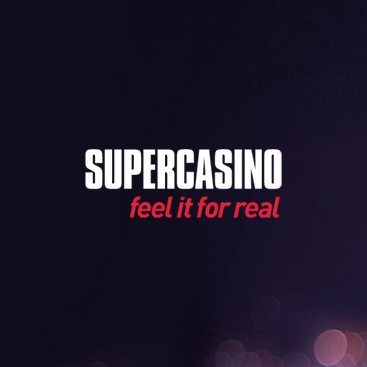 There aren’t a great many casinos on the web these days that are brave enough to focus predominantly on one specific game. What with variety being the spice of life and all that, the vast majority prefer to spread their bets more evenly across as many games as they can cram in. The above is why we are always both interested and curious when we come across an exception to the rule. And in the case of SuperCasino, the keyword really is interesting. Do we mean this in a negative or positive sense? You’ll have to keep reading this SuperCasino review to find out!

Overview
Part of the hugely successful NetPlay TV Group, SuperCasino online made a name for itself by putting a new spin (pun very much intended) on live roulette. If playing online with a live dealer doesn’t quite do it for you, how about playing a televised game of roulette broadcast in real-time with a real TV presenter? It’s not what you’d call the conventional way of doing things and is a curious prospect. But then again, does it add anything relevant to the experience?

Site Summary
First of all, if SuperCasino in any way comes across as slightly familiar, that’s  because it’s almost identical to Jackpot247. Owned and operated by the same entertainment group, these two sister sites follow the same formula and so far seem to have done an excellent job with each and the punters over.

From an entirely neutral perspective, it is probably best not to read too much into the name they chose for this particular website as it is somewhat on the misleading side. Regarding size, gaming variety, the actual number of games available and so on, SuperCasino isn’t even remotely as big as some of its rivals.  Still, quality counts for a lot more than quantity in this business, and as far as we could see at least, everything on offer at SuperCasino is quality. And of course, the fact that they make it abundantly clear that roulette is their primary focus makes this all the more forgivable.

Moving on to the roulette now, what makes SuperCasino online casino different from almost any other casino up and running right now is the way in which it gives you the opportunity to take part in a real-time roulette TV show. It’s the same live dealer action you probably already know and love, only in this case is streamed live but can be watched by anyone, anywhere in the world. As for whether it makes a real difference or not, we have to admit we weren’t convinced when we initially reviewed Jackpot247. The more time we spent with the idea, however, the more we warmed.

The best way of describing the experience will be like this: when you play online with a live dealer, it is like sitting at a table in a casino or anywhere else and playing a standard game of roulette. When you play via live television, you almost get the feeling you’re a contestant on a TV game show. So while it doesn’t change anything to do with the game itself, it does have an undeniably different feel to it. And if you happen to be a fan of TV game shows and roulette, chances are you will be blown away by either of these sites.

There’s also the choice of Live Roulette Express and Double Up Roulette, which are available at all times with an auto-wheel replacing the presenter.  Table games are also available in substantial numbers, including blackjack and baccarat that can is playable with a live dealer. Not via television, only on the website itself.

We were genuinely impressed with the quality of the customer service offered by SuperCasino, which is available 24 hours a day and seven days a week.  Payments in both directions also scored big regarding processing times and account security.  We were even extremely pleased with the experience delivered by the dedicated mobile app which we tested on both iOS and Android platforms alike.

Best Features
Not that it probably needs highlighting it once again, but the very best feature at SuperCasino is roulette…plain and simple. Whether you prefer to play online with the machine in charge, via the web with a real-life dealer or on television with a real-life TV presenter, there’s so much to check out and play online at SuperCasino. We were also extremely impressed with the mobile casino app.

Conclusion
In conclusion, while it is probably fair to say that televised roulette is something of a gimmick, there’s no denying it is an appealing and effective one. As already mentioned, if roulette is your game and you like the idea at least feeling as though you are participating in the SuperCasino TV game show, this is probably the best (not to mention the only) place to tick all the right boxes at the same time!

15 Virgin Games reviewVisit Website Read Review
We use cookies to ensure that we give you the best experience on our website. If you continue to use this site we will assume that you are happy with it.Ok
Agree Decline