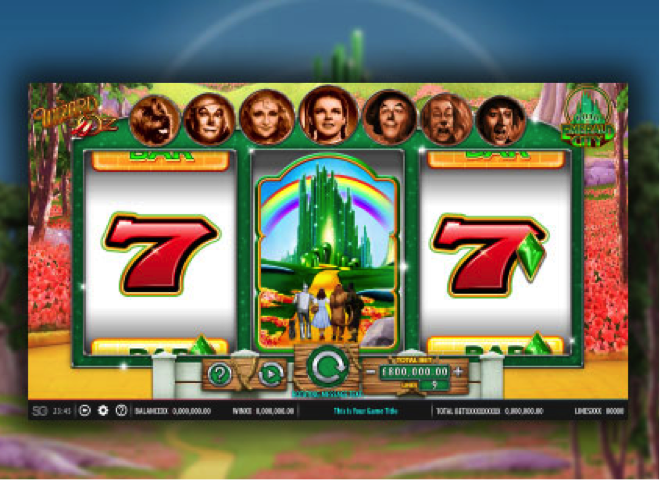 As you probably know, we usually detail two of the latest and/or greatest online slots in these posts. But every now and again, something emerges which more than deserves an entire entry to itself. Whether it’s the significance of the theme, a long-awaited sequel or just something than packs more than its fair share of features, the usual half-post format just isn’t enough.

Trust us when we say that when it comes to Wizard of Oz Road to Emerald City, this is the kind of online slot you could easily write a small book about!

Just released by the good folks over at WMS Gaming, Wizard of Oz Road to Emerald City is deceptive in its simplicity. At first glance, what you see is a simple three-roll slot with three rows and a relatively modest nine paylines. Spins are available from 35p and go up to a maximum of £70 for bigger spenders, catering to most budgets pretty well. As usual, Wizard of Oz Road to Emerald City is compatible with the vast majority of desktop and mobile devices alike.

If you’re a fan of the developer or this particular slots series, you’ll know that this is now the fourth Wizard of Oz slot released by WMS Gaming. And with each opportunity they provide to follow the yellow brick road, they take things one step further in terms of bonus features.

This time around, there’s a pretty impressive contingency of seven to watch out for.

One of the most interesting things about Wizard of Oz Road to Emerald City is the way in which it actually looks and plays best on a mobile device in portrait mode, rather than landscape. The visuals follow the usual theme, with picture perfect snapshots of all the characters and icons you know and love from the original movie. Other symbols include single, double and triple bars, the Emerald City, lucky 7s and the Wizard of Oz.

Speaking of which, it’s this logo that offers the most generous payout during normal play – line up three in a row and you’ll be looking at a prize worth 5,000 coins. The wild symbol takes the form of the Emerald City logo and can be used to take the place of just about any other symbol in the game. There are 2X multiplier symbols during the base game as well, which can see any winning combinations you hit increased twice over in an instant.

Abundant Bonuses
In order to trigger one of the seemingly endless bonus features, you will need to land three or four Emerald scatters symbols on any of the paylines. If you land three, you will access the bonus features – landing four at the same time means also taking home a prize worth 3X your wager at the time.

Glinda The Good Witch Booster feature – this sees a multiplier added to your win or a cash prize paid out instantly, before transferring you over to one of the other six bonus features.

Dorothy Free Spins feature – with this feature, anything from 5 to 20 free spins are handed over randomly. If you entered the bonus round with four Emerald scatters symbols, you will have the opportunity to collect with every Emerald that appears during the feature, meaning the opportunity to play an additional bonus feature.

Cowardly Lion Multipliers feature – this feature provides one free spin to play with, along with the addition of wild multipliers worth anything from 1X to a rather generous 25X. During this free spin, Emerald scatters become wild, meaning a much greater chance of taking home a prize.

Scarecrow Crow Prizes feature – as can be seen in the image here, this feature sees between one and three Crows landing on Scarecrow. The first offers an instant cash prize, the second offering a multiplier or additional cash bonus and the third another multiplier.

Tin Man Winning Spin feature – the second reel is taken over by a multiplier which starts at 1X. During the free spins feature, the multiplier increases each time an Emerald appears on any of the reels, up to a maximum of 25x. Whatever happens, you are guaranteed at least one winning combination and multiplier.

Wicked Witch Free Spins feature – players are rewarded with three free spins, while the first reel is taken over by the Witch wild. Any Emeralds, Logos or Wild symbols that land during the feature become sticky and remain in play throughout the rest of the free spins.

Toto Emerald Trails feature – last but not least, this feature hands over a technically unlimited number of free spins as part of a trail bonus round. Each time an Emerald appears on any of the reels, it is transferred to the corresponding trail at the top of the screen. The further you advance along each of the trails, the bigger the cash prizes you win. And if you reach the end of any trail, you win all of its cash prizes respectively. The feature continues indefinitely until you spin three times without landing an Emerald.

So as you can see, Wizard of Oz Road to Emerald City has a lot going on and doesn’t mess about when it comes to bonus features. But what makes it interesting is the way in which despite its depth, it is still remarkably simple to play with once you get used to it. The base game itself isn’t particularly thrilling or creative, but there are so many bonus features that you rarely find yourself hanging around too long before something exciting happens. And when it does, potential jackpots go well in excess of 3,500X your bet.

Even if you don’t have to be a particular fan of the movie itself, this is one medium-variance slot which is guaranteed to entertain.