NetEnt’s Best Under Inspection – Theme Park: Tickets of Fortune Vs When Pigs Fly 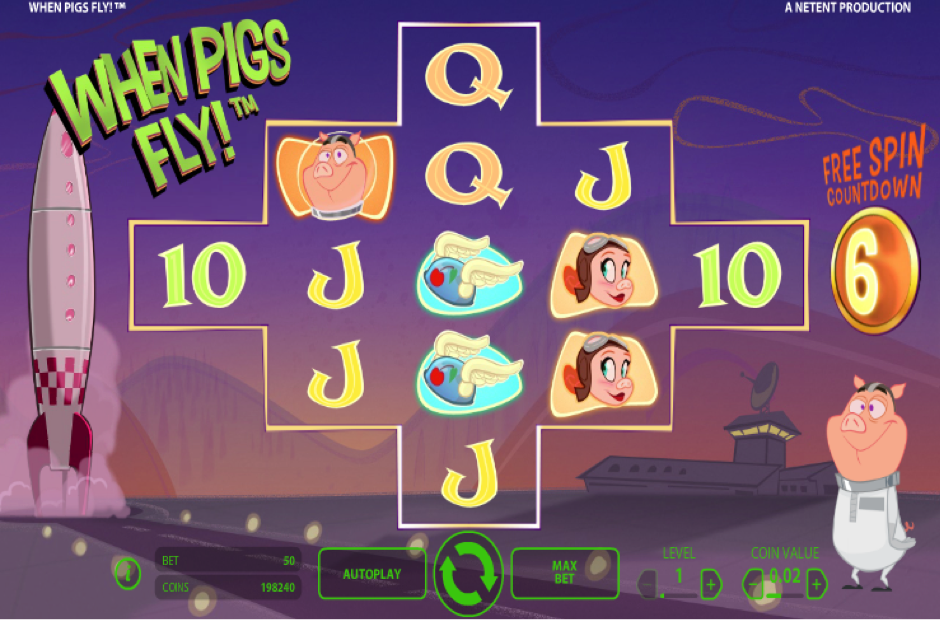 So today brings us to the final instalment of our three-part focus on NetEnt slots, where we’ve taken a look at a few of the modern classics hitting all the right notes with gamers all over the world. For this roundup, we’re taking a look at Theme Park: Tickets of Fortune and When Pigs Fly – two gorgeously light-hearted and enjoyable slots we personally can’t get enough of. 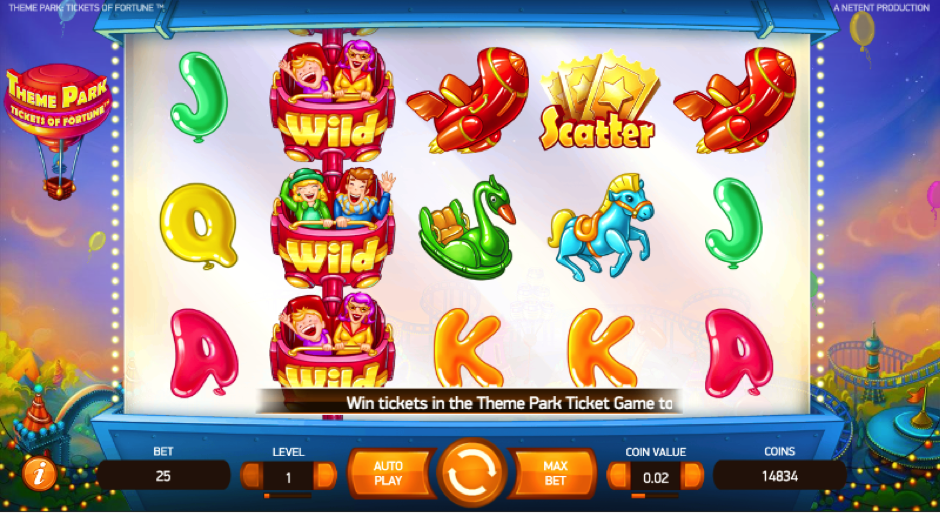 In the base game, the rollercoaster carriage symbol appears as a stacked wild and can guarantee enormous wins if you land three or more in the same spin. There’s also a claw feature that can be triggered at any time, wherein a claw above the reels will grab one of the symbols and pay you a cash prize accordingly. The golden tickets are the scatter symbol in the game – landing three in any positions will take you over to the ticket wheel. When this happens, you get three free spins with the aim of winning as many tickets as possible. You’ll need these tickets to buy your way into the mind-blowing six primary bonus features, witch look a little like this:

Duck Shoot feature – grab your gun and fire five shots at the duck, with cash prizes and multipliers to pay for.

Fishing feature – win cash prizes by hooking fish…that’s about it. You basically hook fish to reveal cash prizes. You can get also get extra picks – it’s that simple.

Sledge Hammer feature – whack the strength tester to send the metre as high as possible. The higher it goes, the bigger your prize.

Skee Ball feature – throw the ball into one of the prize holes, which can be worth as much as 20X your bet.

Can Tower feature – do your best to knock down as many times as possible by throwing balls in their general direction.

Punch Bag feature – simply punch the bag as hard as you possibly can to win generous cash prizes.

What’s really great about Theme Park: Tickets of Fortune is that while it is packed with bonus rounds and special features, it is also brilliantly simple to get to grips with. Even if you are relatively new to slots with any kind of real depth, it’s never even remotely confusing or complex. Variance also comes in at around mid-level, making Theme Park: Tickets of Fortune a guaranteed crowd pleaser.

Next up, we couldn’t help but love When Pigs Fly the first time we came across it, simply due to the way it has been put together. Visually, it looks absolutely outstanding. Not only this, but it utilises a rather unusual five-reel layout, with anywhere from 45 to 3,125 ways to win. It utilises the spinning reels engine and has some interesting bonus features to keep things lively along the way.

The action takes place in outer space, where a bunch of hero pigs are waiting to make your acquaintance. During normal play, it’s possible to win up to 1,000X your bet with a single spin, if you’re lucky enough to line up five When Pigs Fly logo symbols on any winning payline. The wild symbol can be used to take the place of absolutely any other symbol during normal play on all reels except the first, though can substitute symbols on all five of the reels during the free spins feature.

One of the most interesting things about When Pigs Fly is the way in which you are provided with a re-spin after each winning combination. But what’s even more interesting is the way in which with each re-spin, the shape of the reels changes. When this happens, it’s perfectly possible for the changing shape of the reels to then trigger additional winning combinations automatically. What’s more, each subsequent re-spin opens up additional ways to win, going as far as 1,875 for the fifth re-spin.

If you get all the way through to five re-spins and are successful once again, you will then be taken over to the free spins bonus round. You may only get eight free spins to play with, but with an incredible 3,125 ways to win, this really is all you are going to need to win some outstanding prizes!

When Pigs Fly has so much more depth than is apparent when first taking a look at it, though is simple enough for just about anyone to get a real kick out of. It’s a medium-variance slot that should appeal to all tastes and preferences across the board – especially those who don’t take things too seriously, but nonetheless like the idea of very serious prizes to play for.