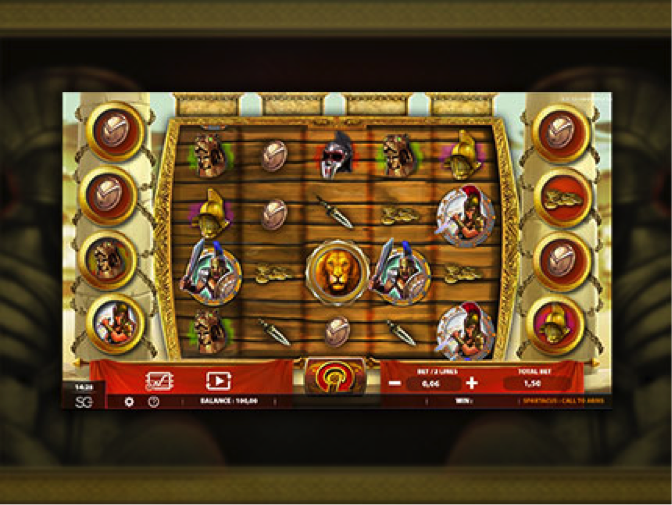 New slots are simply flying out into the market right now at record-pace, so we thought we’d take a look at a couple of heavy hitters you’re guaranteed to get a kick out of. Today, we’ll be giving both Blood Suckers II and Spartacus Call To Arms the usual treatment, though truth be told you’re probably going to want to check out both of them, anyway! 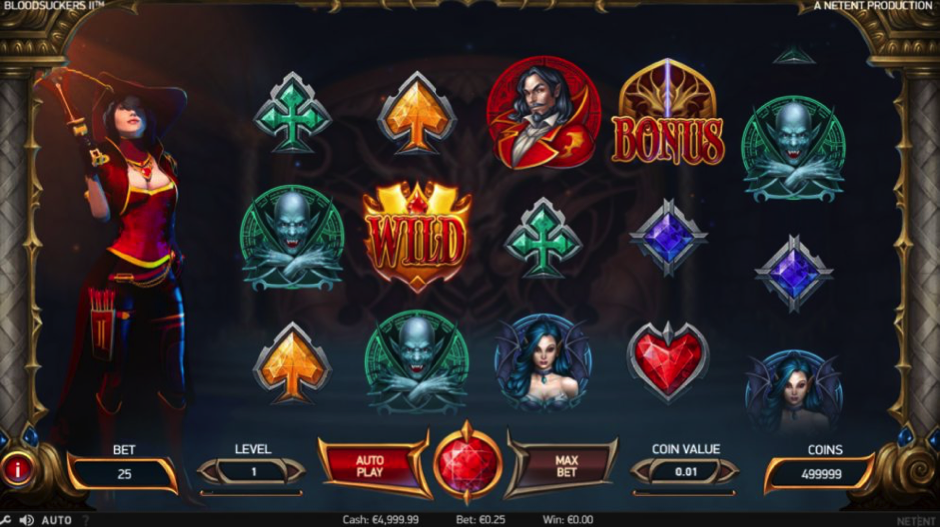 First up, Blood Suckers II comes courtesy of the folks at Net Entertainment and serves as the follow-up of the incredibly popular original…the title of which you can probably figure out for yourself! This time around, it’s the usual five-reel setup with a total of 25 paylines to play for, with spins starting from 25p and going as high as £250 each for high-rollers. Interestingly, though presumably for a limited time only, Blood Suckers II is right now exclusively available at BetSafe Casino and Mr Smith Casino only.

As is usually the case, the action follows a young hero vampiress on a mission to retrieve the ancient riches of her ancestors by outfoxing the Demon guarding them. All the symbols you’ve come to know are once again present and correct, with the red vampire hunter symbol being the highest paying normal symbol – 20X your bet for lining up five in a row. However, the wild symbol takes things a pretty big step further – five of these on a winning payline are worth 400X your bet!

There are two mini-features that can kick in at any time during normal play – the first of which is the Scatter Shot feature, which sees an additional scatter symbol added to the reels and 10 free spins awarded. Then there’s the Bonus Shot feature, which adds an extra bonus overlay symbol to one of the first three reels.

If you manage to line up three or more bonus symbols in a row, you’ll enter the Hidden Treasure bonus round. Four bonus symbols open the same feature but with a 2X multiplier, while five bonus symbols increases all wins 3X. You start out by picking from chests and coffins, which will reveal scatter symbols, a key symbol, cash prizes or the demon. The key symbol takes you to the next level, which after level five can be worth a bonus prize of 40X your bet. You keep on playing until you uncover the demon symbol, though there’s every chance of taking home more than 600X your bet before this happens.

And then of course there’s the Blood Rose Free Spins feature, which can be accessed by landing three or more scatters in any position at any time. Along with a 3X multiplier, you get 10 free spins to play with initially and can earn another 10 by landing three more scatter symbols during any of your free spins. It’s a very simple bonus round on the whole, but presents players with the opportunity to take home up to 1,298X your line bet.

On the whole, Blood Suckers II is a predominantly familiar tale which has been moderately enhanced in most key areas. The visuals and sound effects have both been stepped up, the base game has been made slightly more interesting than the bonus rounds are more action packed and potentially rewarding than in the original. As a high-variance slot, it usually takes some time before the bonus rounds can be accessed, but more often than not it turns out to be more than worth the wait!

Next up, Spartacus Call to Arms was recently released by the folks at WMS Gaming, bringing five reels and a total of 50 paylines to the table. Spins are available from 25p up to a maximum of £100 each and can be played using desktop and most mobile devices alike. As you may have guessed, Spartacus Call to Arms is the sequel to Spartacus Gladiator of Rome, which is an extremely popular slot both online and in the real world.

In terms of visuals, simplicity is the name of the game with Spartacus Call to Arms, so it’s best not to expect to be two blown away. That said, it’s extremely polished and professional and plays like a dream. All the symbols you’d expect are present and correct, including gold coins, swords, shields, masks and the gladiators themselves. There’s also a wild which can take the place of any symbol apart from the bonus, while at the same time paying out 100X your bet if you manage to line up five in a row.

Things are also kept quite simple with the bonus features, of which there are two to play for. After every spin, four random symbols appear on the special reels above the main reel set, with any wild symbols then being placed on the main reels in a random position. When you match at least two symbols as part of a winning combination, the resulting win will be increased by a multiplier worth anything from 2X to a whopping 500X your win, if you manage to match the maximum of eight.

And then of course there’s the free spins bonus feature, for which you’ll need to land three bonus symbols on the first, third and fifth reels at the same time. Along with receiving 10 free spins, you’ll also instantly be paid a prize worth 2X your bet. Once again, you will receive multipliers on all wins by matching winning symbols to those in the columns above the reels, this time anywhere from 4X to an incredible 1,000X!

It’s these generous multipliers that keep things interesting with Spartacus Call to Arms and bring something genuinely enjoyable to the base game. As another high-variance slot however, you’ll need to exercise plenty of patience as the real action and those big wins alike don’t tend to come around particularly often!