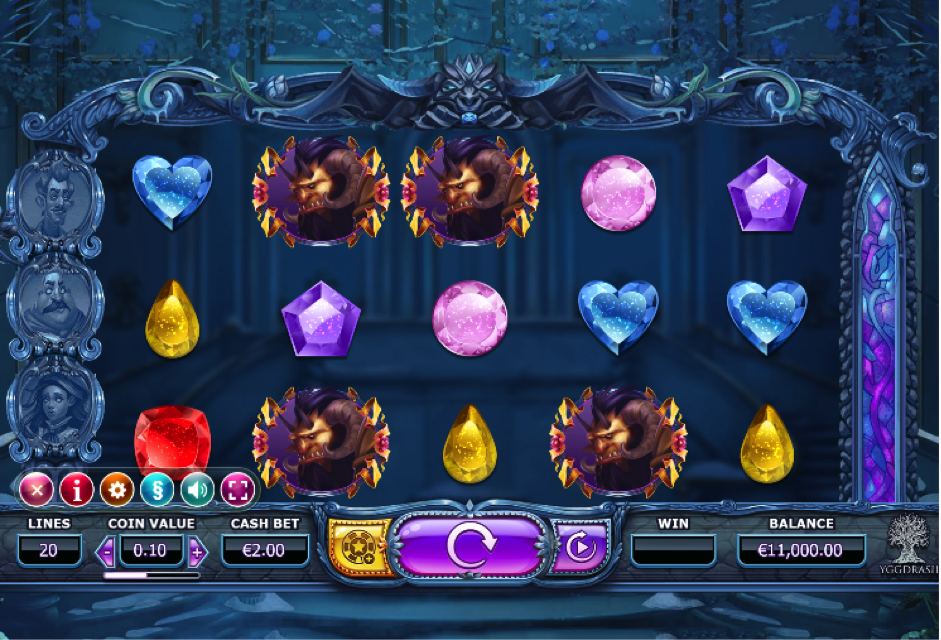 When we first caught wind of a new Beauty & The Beast slot on the horizon, we of course figured it would be based on the latest live action remake. After all, this was the biggest thing to happen to the franchise in some time – albeit somewhat controversial in the eyes of a fair few traditionalists. Nevertheless, that’s not the route Yggdrasil Gaming decided to take with their latest outing. The given the fact that we’ve seen so many different Beauty & The Beast slots already, what does their most recent incarnation bring to the table that’s unique?

Getting the basics out of the way first, Beauty & The Beast takes the familiar five-reel format with three rows and a total of 20 active paylines. Spins are available starting from 20p each and go up to a maximum of £100 for high-rollers. As usual, the action takes place across desktop and mobile platforms alike – no real compatibility or performance issues to speak of. And to keep things as interesting as possible, Beauty & The Beast features nudge reels, synced reels, random wilds and the always tempting Golden Bet feature, which gives players the opportunity to take potential wins to a much higher level with a bunch of modifiers.

In terms of visuals, Beauty & The Beast ranks somewhere in the middle. To be honest, it isn’t particularly mind-blowing in terms of presentation or creativity. The story plays out in a relatively dark and dismal-looking theatre, with most of the symbols appearing as different coloured crystals. It’s a relatively low-key affair in general, with the soundtrack likewise building a rather tense and mysterious atmosphere. The Beauty and the Beast also appear as symbols and can appear stacked two-high, while paying 250 coins for lining up five on any winning payline. The broken mirror wild symbol is good for taking the place of any other symbol, apart from the scatter.

There’s a handful of randomly triggered bonus features that can occur at any time during the base game – each of which involves one of the three servants from the story.

The first of which is the Chef feature, which synchronises the second, third and fourth reels for one spin, during which they are aligned and largely guarantee a winning combination. Then there’s the Butler feature, where one of the reels automatically nudges downwards or upwards, if it is possible to improve the value of a winning combination. This nudge may also trigger the free spins bonus round. Last but not least comes the Maid feature, where up to four additional wild symbols make their way onto the reels in random positions.

Golden Bet
As for that potentially lucrative Golden Bet feature, it’s a totally optional extra which can be activated during normal play at any time and deactivated likewise. It increases the wager required with each spin, but also provides the player with three additional options to choose from. Which look a little like this:

When you enter the round, you will be able to choose from three available modifiers for the duration of the feature. It’s here that you’ll need to refer back to those three random features that can trigger any time during normal play – these being the modifiers that can apply during the free spins bonus round. What makes the difference is that if you decided to go with the Golden Bet feature, you will be able to choose two of these modifiers, rather than the usual one.

In any case, if you once again manage to land at least three scatter symbols in any position during the free spins bonus round, your tally returns to 10 and you once again get to choose an additional servant. It’s possible to re-trigger the bonus round twice, by which time you are guaranteed to have all three modifiers in play at the same time.

If you ask us, Beauty & The Beast does a pretty impressive job ticking all the right boxes. First of all, the inclusion of three random bonus features during the base game makes for plenty of action and excitement guaranteed. Not to mention, it’s also a relatively low-variance slot, which means extensive dry runs are largely out of the question. The free spins bonus round is excellent, while the addition of modifiers and the optional Golden Bet feature take everything to the next level. Plus there’s the obvious appeal of not only huge potential jackpots, but seriously generous handouts when landing four or five scatter symbols at the same time.

Despite the fact that the latest incarnation of Beauty & The Beast doesn’t look particularly spectacular, it more than delivers the goods where it counts. And trust us when we say you really don’t have to be a big fan of the movie itself to get a kick out of this genuinely impressive Yggdrasil Gaming release.