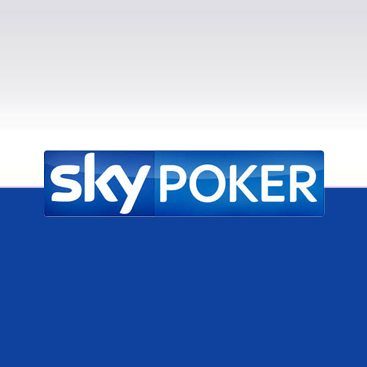 A fan favourite among those who enjoy watching televised poker games, Sky decided some time ago that the time that come to branch out its own online gaming offerings. Which it did, in the form of Sky Poker – a comparatively modest poker room which if nothing else has its own fair share of unique features. But at the same time, in an industry where there are already thousands of established poker rooms and some seriously heavy-hitters, can a few special features here and there really make for a winning overall experience? One thing’s for sure, you can trust Casino Papa to provide you with the inside scoop!

Overview
The general consensus with regard to Sky Poker among its fans and followers points to a poker room that’s not without its charms, though is far from flawless. The six-max the table limit infuriates just as many players as it delights – the same being said for pretty much everything else that’s on offer. Nevertheless, it’s going strong enough today after a good while up and running so there’s no disputing the fact that at least in the eyes of the poker community, they must be doing something right. Well, the UK poker community anyway – Sky Poker isn’t available for folks in the United States!

Site Summary
If there’s one unique feature that seems to be an absolute winner among Sky Poker customers, it is the opportunity to have the games you’re playing broadcast live across the entire world on Sky satellite television. That’s right, each and every day many of the poker tournaments hosted by Sky are broadcast live, meaning you can play the game on your computer and watch the action unfold on the television beside you…should you so wish. Call it a gimmick, but we absolutely guarantee that the first time you get the opportunity to tell your friends to tune in just before you make a killing, you’ll be hooked!

The site itself is fantastically simplified and makes it easy to dive head-first into the action. There are currently three types of poker available at Sky Poker, which are Holdem, Omaha and Hi-Lo. Tournaments are available in abundance, it’s almost always possible to find a seat at the table of your choosing and games start from just a few pennies – perfect for players at every level.

For the most part, everything operates like a dream. The site is powered using specially designed software exclusive to Sky Poker which was developed by Orbis. There have been occasional reports of technical difficulties impacting players at the worst possible times, but it’s really not as if any site in operation these days can guarantee 100% flawless operation, 100% of the time.

The subject of special offers and bonuses is one that Sky Poker clearly takes seriously – you might even say to an almost OTT extent. The main bonus system centres around Poker Points, which can be used to buy a wide variety of exciting tournaments. There’s also an unusually generous deposit bonus offer up to 200%, though all bonus funds must be fully played through at least once within the first 72 hours. Other than this, the list of introductory and on-going promotions is spectacularly large and complicated, though features some seriously tempting deals.

When put to the test, the customer service team at Sky Poker seems to be populated entirely by knowledgeable professionals who know what they’re talking about…and care, which is a bonus. Deposits and withdrawals are handled and processed as smoothly as anywhere else, there’s an absolutely outstanding mobile app for poker on the go and there are certainly plenty of loyalty offers to encourage players to stick around long-term.

If there’s one downside to being noted, it is the way in which traffic volumes at off-peak hours can be rather on the low side. But then again, some might consider this a good thing!

Best Features
While it doesn’t exactly influence the gaming experience in a technical sense, the ability to watch the action unfold on live television while you are playing in the tournament is undeniably thrilling. Other than this, the extensive catalogue of bonus offers and promotions really does make Sky Poker stand out.

Conclusion
On the whole, the fact that Sky Poker is up against such heavy competition makes it all the more impressive that they managed to come up with something that is both excellent and in some respects unique. It isn’t what you’d call revolutionary, but in terms of classic poker enjoyment, mobile gaming and the chance to play in some world-class tournaments, it ticks all the right boxes in spades.