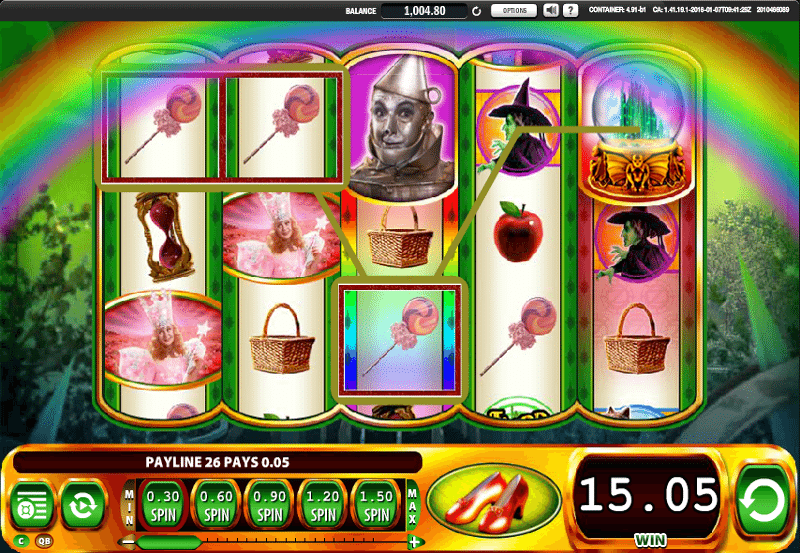 Just one look at Wizard of Oz – Ruby Slippers and you’ll know for sure you’re not in Kansas anymore. Not that you are probably in Kansas in the first place, given the fact that you’re reading this from somewhere on the shores of Blighty!  But anyway, the folks at WMS (Williams Interactive) clearly decided that having two Wizard of Oz games to their name clearly wasn’t enough. They recently ousted the creatively titled Wizard of Oz – Ruby Slippers 2, with their first having been just simply named Wizard of Oz. Which begs the question – flopping a dead horse, or maximising a hugely popular and enjoyable slot gaming franchise?

Well, what you’re looking at in Wizard of Oz – Ruby Slippers is a five-reel- 30-payline slot that sits right in-between its younger and older siblings. The fact that WMS has exclusive rights to the Wizard of Oz franchise means that if there’s one thing you can say about this trio, it’s that you won’t find anything similar elsewhere. You know the story, chances are you are quite fond of the it and the idea of combining it all with a delightfully whimsical slot experience is appealing to say the least. Dorothy’s here, Toto’s standing by and the Wicked Witch of the West is close by to scare the pants off you.

It’s an extremely pretty affair and has the kind of soundtrack that will inevitably be stuck in your head for days. Coin values vary from 0.01 to 2.00 per line and there are a total of 30 pay-lines to play with. When you’re ready, hit the Yellow Brick Road (aka the spin button) and off you go.

Is there treasure to be found at the Emerald City? You better believe there is – find yourself lucky enough to hit five jackpot symbols and you’ll walk away with no less than 12,000X your bet! Seriously – that’s life changing money right there! Of course, you’re far more likely to take home a slightly lower 5X minimum bet-line payout, which is achieved by scoring three apples, baskets, lollipops or hourglasses. We told you it was whimsical – we weren’t kidding!

The wild symbol is (unsurprisingly) the ‘Wizard of Oz’ symbol and can take the place of pretty much any other symbol, bar the big-scoring jackpot. The Wizard also makes an appearance from time to time and is the game’s scatter symbol. Find copies of the wizard and you’re good for ten-times your total bet and a re-spin, while three wiz symbols will net you a free re-spin only.

There’s also the randomly occurring ‘Ruby Slipper’ feature, in which any number of the reels turn totally wild. When this happens, you have every chance of hitting a multiplier worth anything from 2X to 10X your win. And the features don’t stop there either – from the ‘Crystal Ball Feature’ to the ‘Emerald City Freespin’ to the ‘Find the Broom Feature’, there’s a ton going on and always a good reason to have another spin.

Long story short therefore, Wizard of Oz – Ruby Slippers not only looks the part, sounds great and has exceptional jackpots to play for, but it’s also bursting at the seams with more features than a handful of lesser slots.