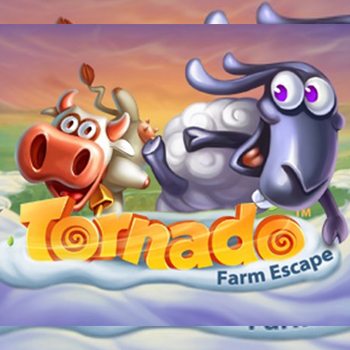 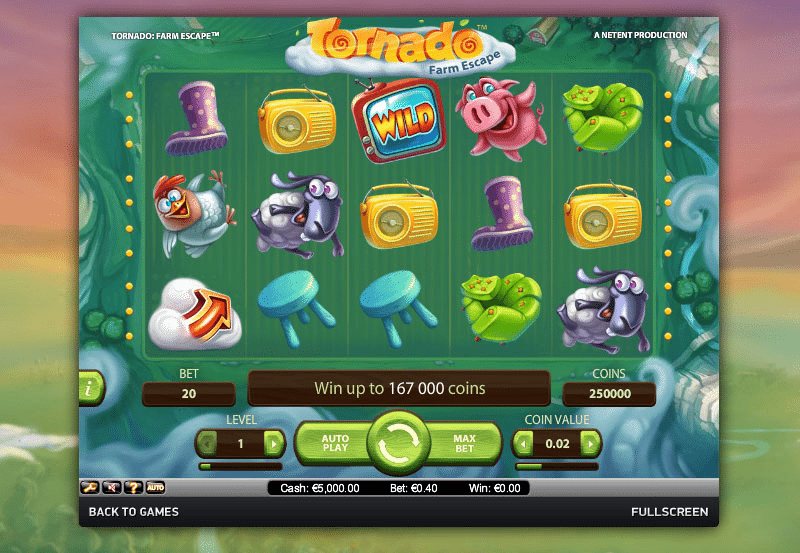 NetEnt’s first entry to the online slot sphere in 2015, Tornado Farm Escape tells the story of a bunch of rather unfortunate farm animals looking for a means to skip town. And when the solution arrives in the form of a tornado, they couldn’t be happier to see it! The story is told quite gorgeously in one of NetEnt’s trademark intro animations, after which you’re presented with a bright, bold and colourful collection of classic farmyard symbols. And just as the tornados are surprisingly good news for the farm’s livestock, they’re also out to help you take home a prize or two!

Wellington boots, radios, milking stools, chickens, pigs, sheep, cows…well, what else would you expect to see on the reels? There are two ways of scoring wins with Tornado Farm Escape – the first and most obvious being that of lining up at least three identical symbols left to right. Along with this, there’s also the awesome tornado feature that rips any number of symbols clean off the reels, which when put together can likewise lead to tasty takeaways.

Play starts from as little as 0.01 per spin and all 20 of the paylines are fixed. It’s the cow symbol you’ll be hoping to see plenty of during play – five in a row and you’ll be milking your way to a delightfully creamy 700X your wager. At the bottom rung of the ladder, three radios, boots or stools are good for 5X whatever you decided to put on the line.

Reel five features a cold symbol while the first reel is home to a hot symbol. It’s when you land them both at any position on their respective reels at the same time that the tornado makes its way into town. During the feature, the tornado sucks up every active symbol (the central symbol on reel three) on the game board and every wild with each spin, until the feature ends. If you’re lucky enough to have eight wilds ripped from the board, that’s a prize worth 4,500X your wager!

There’s also a randomly activated ‘Storm’ feature, which swaps any number of normal symbols for wild symbol and increases the odds of hitting a big win.

So, how does it all stack up as a slot? In a word, brilliantly! It’s another great example of how simplicity can often beat the living daylights out of needless complexity. It might not have all the features and unique attributes in the world, but those it does have are simply stellar.

Tornado Farm Escape might not break the mould, but in so many ways it blows the competition right out of the water…pun very much intended!