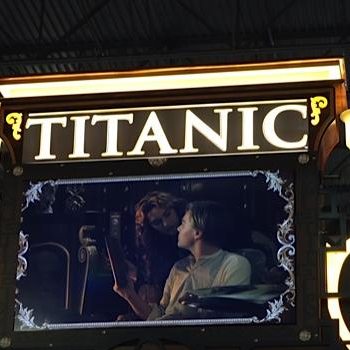 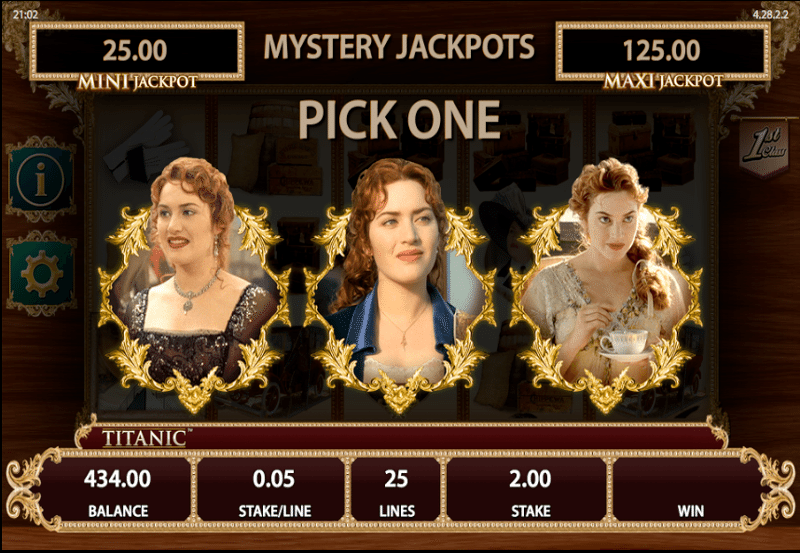 Sink or swim – this time, it’s destiny that’ll decide your fate! This particular slot from Bally Technologies is themed around the James Cameron movie from 1997, which told the not-so-historically-accurate tale of a couple of young lovers meeting for the first time on the doomed vessel. The tale of the Titanic is one of immense tragedy, though we’re happy to say that the Titanic slot is a much more enjoyable experience and one you’ll actually want to repeat.

Each of the most important characters from the movie makes an appearance, along with a variety of symbols and icons from the ship itself. There are three types of tickets on offer for players – first class if you choose a coin value of 0.05 or higher, second class for 0.02 to 0.04 coin values and third class if you bet 0.01 per line. All bets are multiplied 25X and the higher the class of the ticket you purchase, the better the features and the bigger the potential wins.

It’s the Titanic logo itself that pays the normal play jackpot – five in a row and you’ll be in for smooth sailing with 500X your wager. The chest symbol by contrast could net you a slightly choppier 5X payout by landing three in a row.

As for bonuses and special features…well, let’s just say they’ve cut no corners with either! Wilds take a number of guises including the ‘Wild’, ‘Double Wild’, ‘JackRose Wild’, ‘JackRose Double WIld’, ‘Ship Wild’ and ‘Ship Double Wild’. There’s also the ‘Mystery Double Wild’ that pops up randomly and can be triggered at any time, which results in up to five double wilds appearing on reels two, three, four and five. And then there’s the ‘Mystery Wild’ which turns two randomly selected reels wild.

Next comes Jack’s Drawing Mystery Feature, which is Titanic’s take on the ‘pick from a bunch of hidden symbols until you match three’ bonus game standard. There’s a ‘Mini Jackpot’ and ‘Maxi Jackpot’ to play for in the Mystery Jackpots feature, which could result in a win of up to 400X your bet.

There are also four bonus games that can be accessed by landing three ‘Ship Double Wild’, ‘Ship Wild’ or ‘Wild’ symbols in any position – the Pick Up Bonus, the Safe Bonus, the Heart of the Ocean Bonus and Make it Count Bonus.

To be frank, Titanic is so incredibly overloaded with features (in a good way) that you really need to check it out in person to get an idea of what’s on offer. We’ve barely scratched the surface here – suffice to say that while the visuals and animations are a bit on the disappointing side, Titanic has more bonus rounds and features and half a dozen comparable rivals.