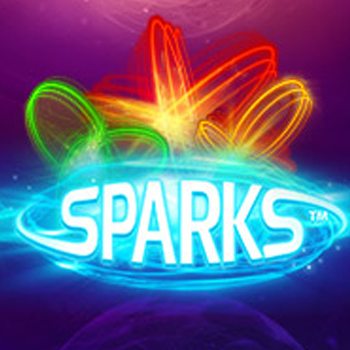 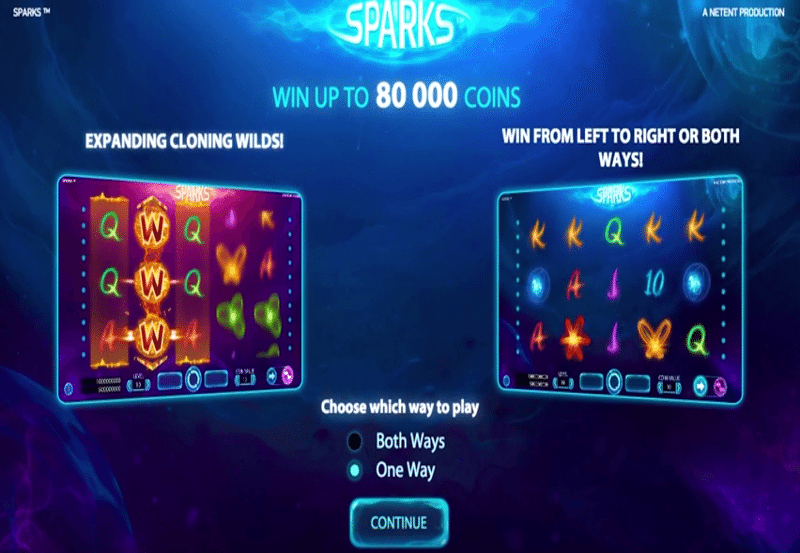 Let’s be honest – when you put out a slot as biblically successful as Starburst, it’s inevitable that you’re also going to cook up a bunch of others that look and feel very similar. Which is why NetEnt’s Sparks didn’t come as the biggest surprise when it landed – another gorgeous electric-themed slot that’s bright, beautiful and brilliantly entertaining. Famed for giving players the option of choosing win one way (left to right paylines) or win both ways (self-explanatory) play types, there’s also the delightful ‘cloning wilds’ feature which takes enjoyment to the next level.

Along with the five coloured sparks – and very sparkly they are – there’s the usual roundup of playing car values between 10 and ace. Coin values can be set at anything from 0.01 to 2.00, paylines are fixed at all times and your bet level can be set between 1 and 10. Choose how much you want to put on the line, select your play mode and hit ‘spin’ for an undeniably electrifying experience!

During normal play, the red spark represents the highest paying symbol and will net you the jackpot if you’re lucky enough to land 5 in a row. At the bottom end of the table comes the quintet of playing card values – any three identical cards in a row and you’ll be looking at a decent 10X your wager.

Wild symbols appear in two forms – one being an icy W which basically does the job of a standard wild, substituting in-play symbols apart from the other wild. Speaking of which, the fiery wild symbol is the game’s ‘expanding clone wild symbol’ and can help you out in a number of way. It might expand down the reel, up the reel or in both directions at the same time. After this, it will guarantee you a three-symbol win at the very least by turning the symbol on its left the same as the symbol on its right. Suffice to say, land two expanding wilds at the same time on the second and fourth reels and you could be looking at a whopper of a payout!

These expanding wilds alone make Sparks the kind of slot you simply have to check out and will always find an extra reason for having another spin with. The gameplay is wonderfully simple and easy to get into, while the potential for huge prizes is big to say the least. It might not have the same immersive story or theme as some of its rivals, but in terms of good old fashioned gameplay, it’s a testament to why NetEnt remains the market leader.