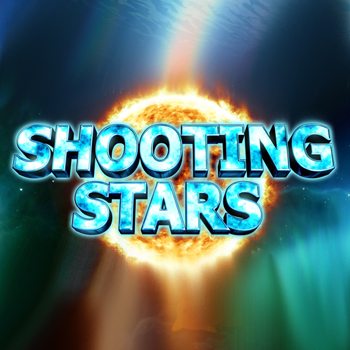 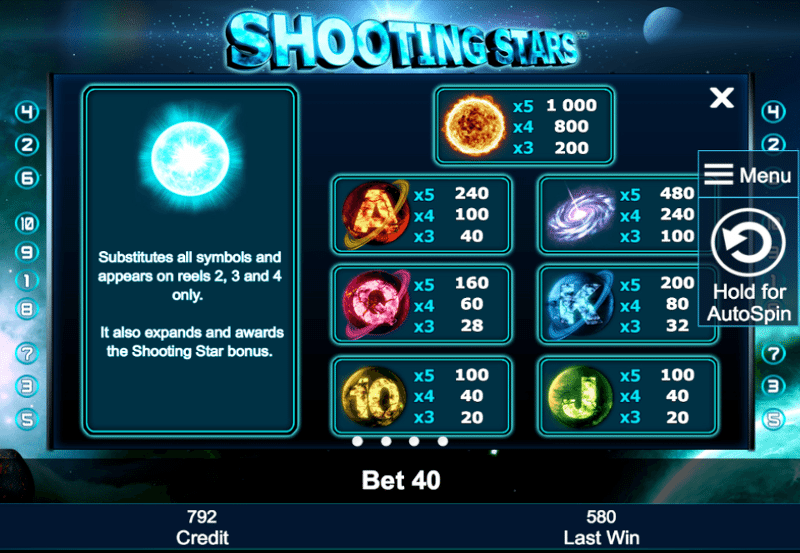 Just to answer the question most ask the moment they hear of this game, the answer is no. Unfortunately, Shooting Stars has absolutely nothing to do with the undeniably fantastic TV gameshow featuring Vic and Bob, so don’t be disappointed when there’s no sign of the comic duo. Instead, what Shooting Stars delivers is a highly immersive space-based slot experience, fresh from the most creative minds at Novomatic. With five reels and just ten pay-lines to play for, you’d like to think they up the ante when it comes to special features and the like. In reality however, it’s largely just Novomatic’s very similar take on Startburst from NetEnt.

Which is of course great if you happen to like Starburst!

Unsurprisingly, it’s a tale of wall-to-wall space-based symbols and visuals.  Planets, galaxies, stars and so on – all present and correct. We weren’t quite able to figure out why the surface of each planet seems to have the value of a playing card attached to it…apparently it’s of no relevance or meaning whatsoever.

Shooting Stars seems to make placing your wager a little bit more complicated than it’s perhaps necessary. You first have to go into the menu option to the right of the screen, before selecting how many pay-lines you wish to play for and then summarily how much you would like to bet per line. Once you’ve put your cash in place and are ready to go, feel free to engage warp drive by hitting ‘Spin’ and hoping your lucky stars are out in force tonight.

As it tends to be standard, the lowest payout you can expect if you’re lucky enough to win is 5X your bet. This happens if you hit three of the golden planets or green planets on an active pay-line, which are the lowest scoring symbols. The highest payout in normal play comes courtesy of the sun symbol, which in the case of hitting five in a row will net you cool 250 X your bet.

Any of the symbols on the middle three reels can be substituted by the light blue ‘wild star’ symbol. Not exactly subtly taking a leaf from the book of Starburst, wild stars swell to fill the reel resulting in a free spin being awarded. If you get lucky, though can keep happening until all three middle reels are wild.

Which is really where it comes to an end as far as what’s on offer from Shooting Stars goes. If Shooting Stars had arrived first or was the only game of its kind to follow this formula, we’d be head over heels in love with it. As it happens, it’s largely identical in most ways the Starburst we’ve already known and loved for some time, just in a slightly different form. So once again, if you happen to like Starburst (or have yet to come across it), chances are you’ll be more than happy with Shooting Stars.