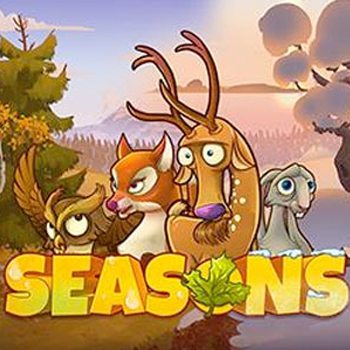 Joy? Fun? Seasons in the sun? Yes, yes and…well, we’re not so sure about the third one! Fresh from the depths of Yggdrasil Gaming came this five-reel, 20-payline slot that’s actually four different games rolled into one. How exactly? Well, it’s all a case of the season changing after ever ten spins, which at the same time brings an array of new features into play every time. Which means that if you’re not into the current features and bonuses, spin another few times and you can try something new!

Symbols appear in a wide variety of guises in some way or another related to the seasons of the year. From toadstools to pinecones to blueberries to strawberries, there’s also a liberal sprinkling of playing card values fashioned out of colourful leaves. Your bet is always increase 20X and the paylines are fixed, coin values go from 0.01 to 5.00 and when you’re ready for a dose of all four seasons, hit the button and you’re away!

It’s the sweetest of sweet strawberries that pay biggest in normal play – five in a row and you’ll be gobbling down 1,000X your wager. The club and diamond card suits are both worth 5X your wager, if you land three identical symbols in a row.

As for those seasons, each brings a different wild into play which likewise triggers new features as follows:

Free spins can be triggered by landing at least three of the respective symbols at any positions, up to a maximum of 30 free spins for five free spin symbols. The likelihood of landing wilds increases significantly during free play.

So the big question is – does Seasons measure up as a genuine year-round slot? In a word, quite possible. (We know, that’s two words.) The graphics, animations and soundtrack are all right on point. The way in which the features shift every 10 spins is also a great idea and there are plenty if big wins to play for. Which in turn means that if Seasons doesn’t keep you entertained for a full year, chances are you’ll have great fun with it for a while at least.