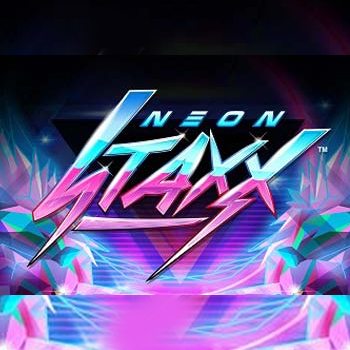 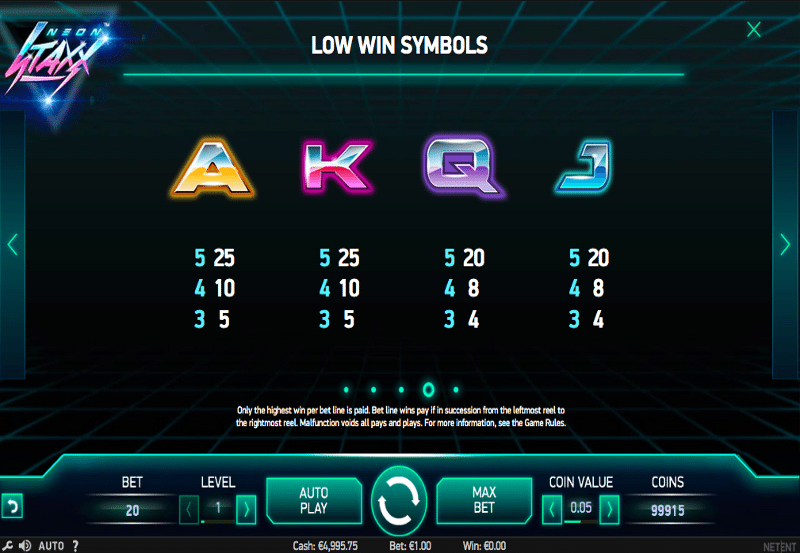 It’s hard not to look at Neon Staxx and immediately think of Starburst. But at the same time – is this necessarily a bad thing? The way we see it, no…no it isn’t! NetEnt unleashed Neon Staxx on the world back in 2015 complete with extremely pretty visuals, the promise of at least a couple of new features and the kind of 80s soundtrack you’re guaranteed to love or loathe.

We love it…but that’s just us!

It’s an extremely simply five-reel slot with a total of 40 paylines, amped up in a big way by the SuperStaxx feature. This basically means that one symbol on any reel during any spin can come out stacked, thus spreading out and taking over the whole reel. Sometimes…though not very often…this can happen on more than one reel at the same time, in turn leading to the possibility of huge payouts. Along with playing card values from jack to ace, Neon Staxx features animal symbols including a snake, eagles, bear and lion.

Coin values start out at 0.01 and go up to 0.50, all 40 paylines are in play at all times and bet levels can be adjusted between 1 and 10. As soon as you’re sorted with the cash you’re putting on the line, hit the big shiny button and away you go!

The biggest standard payline payout comes by hitting five lion symbols in a row, which equates to a win worth 100X your wager. On the slightly more modest end of the scale, three queens or jacks will see you taking home a win worth 4X your bet.

A bit of much-needed excitement is added to Neon Staxx by way of golden wilds, which can also become stacked and can replace all symbols apart from the scatter. Speaking of which, the scatter is a pink and green symbol that’s good for free spins by landing three or more in any position. Five will net you 20 free spins, four scatters are good for 15 and three will still win you a generous 10 free spins.

As for how it all adds up, there’s no disputing the fact that while NetEnt may be the market leader for the flashiest of fancy slots, they also know exactly what they’re doing with the simpler stuff. Features aren’t exactly bursting out of Neon Staxx from all corners, but to be honest it delivers exactly what it needs to. Easy to get into, great to look at and with solid wins to play for. If you’re more about the gameplay than the added extras, Neon Staxx might be right up your street.