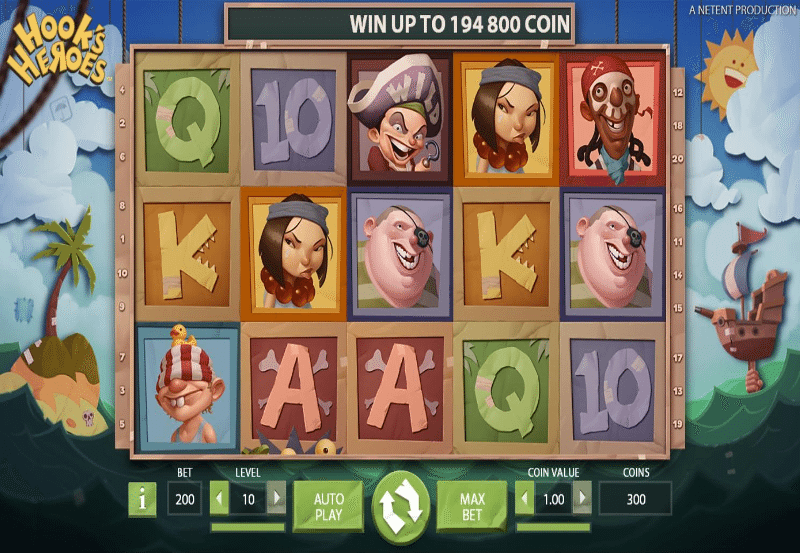 That’s right – yet another pirate-themed slot from the masters over at NetEnt. Hook’s Heroes officially hit dry land in 2015, joining an already overcrowded nautical-slot market with very little room for manoeuvre. The only difference being that rather than falling foul of all the usual clichés, Hook’s Heroes delivered a lesson on exactly how the pirate-slot-genre should be done!

Rather than real-life pirates…or at least those from story books…Hook’s Heroes is all about a bunch of kids playing pirates. It’s the classic combination of five reels and 20 paylines, brought to life with the most gorgeously colourful visuals and genuinely impressive animations. The soundtrack and sound effects aren’t nearly as annoying as they tend to be elsewhere, either…which is a win in its own right.

Along with the main characters you’ll be swabbing the decks with, playing card values from 10 to ace make up the in-play symbols. Coins can be set at 0.01 to 1.00 and you can put up to ten coins on the line with every spin. As soon as you’re ready to set sail, shout out a spirited ‘Aarrr!’ and hit the spin button.

The skull-face-painted pal of Hook is the highest paying symbol in normal play and will see you taking home a full 900X whatever you put on the line. For lining up a trio of queens, jacks or tens, you’ll pocket a slightly less thrilling 5X your win. The wild symbol appears as the Captain Hook symbol, which is good for taking the place of any other symbol with the exception of the scatter.

Scatters take the form of a happy-looking little fella dressed up as a crocodile. Generously, only two scatters are needed to win yourself a free spin, during which you’ll also benefit from one of the following special features:

You’ll be able to choose which of the features you’d prefer to play if you hit three or more scatters at any positions on any of the reels. The pirate feature will give you 15 free spins to play with, the mermaid 10 free spins and the fairy brings you five.

To be honest, the idea of another pirate slot always prompts a collective sigh, yawn and shrug. Which is why we’re delighted to say that no such reactions are warranted with Hook’s Heroes – it really is a winner! The features and bonuses are just brilliant, while standard play ticks all the right boxes if you’re up for a genuinely enjoyable treasure hunt.