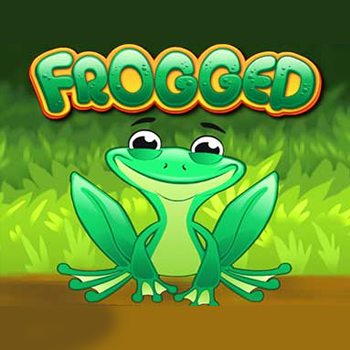 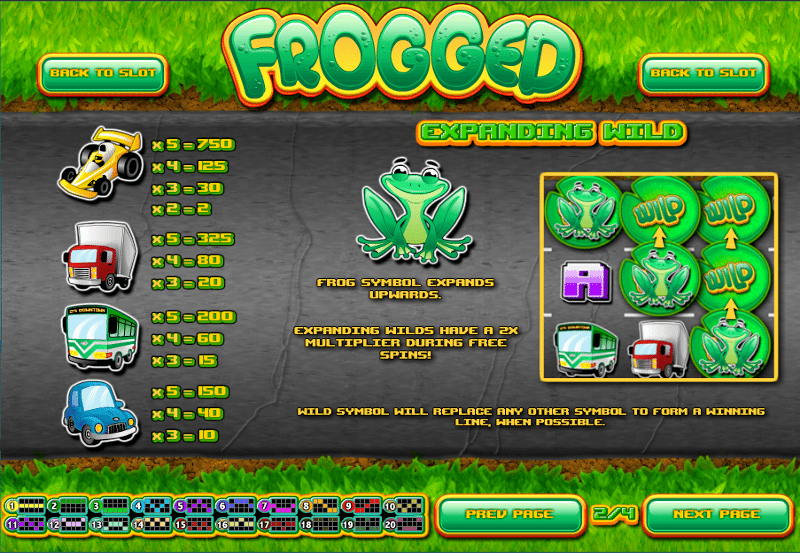 When it comes to video games and slots alike, you’ve really got to feel for frogs. They’ve not exactly had an easy ride, ever since Frogged emerged from the ranks of Konami in the 80s and led to the untimely death of tens of millions of virtual frogs. So you’d like to think that if frogs were to be the star of the show these days, they’d be given slightly more thoughtful treatment at least.

And you’d be wrong. In the case of Frogged, what you’re looking at is a seriously enjoyable Rival Gaming slot with the usual five reels and 20 paylines. As for its theme, it’s basically a take on the 80s classic and focuses on trying to get this poor little green bugger across the road without it being splatsville!

All the symbols you’d expect are present and correct – lorries, buses, cars, a Formula-1 racing car and the rather unfortunate frog. Choose your coin size, choose how many paylines you’d like to try your luck with and kiss the little fella goodbye while saying a prayer he makes it out the other side in one piece!

Payouts vary from the tasty to the downright decadent. Land any three matching playing card values in a row and you’ll take home a modest 2X your bet. By contrast, if you find yourself staring at five Formula-1 cars in a row, you’ll be looking at a prize worth 750X your bet.

In spite of all the rough treatment he’s going through on your behalf, the frog does you yet another kindness by serving as the wild symbol. When he turns up at the same time as a winning combination, he might just hop away and leave a trail of additional wilds in his wake. And of course that’s a good thing.

There’s also a scatter symbol in the form of a bulldozer – three of which appearing anywhere will score you seven free spins and a cash win. And if you hit another three bulldozers while using your free spins, you’ll be taken off to the ‘River Rapids’ bonus round. This is where the road vehicles are replaced by the crocodile, snake, turtle and log you might remember from the original. There’s a stick wild to be found in the guise of a huge fly – plus you’ll get seven free spins just for entering the bonus round in the first place!

Even if you don’t happen to be a child of the 80s, it’s impossible not to get a real kick out of Frogged. Everything about it is cute, quirky and with a delightfully retro soundtrack that’ll be stuck in your head for days.