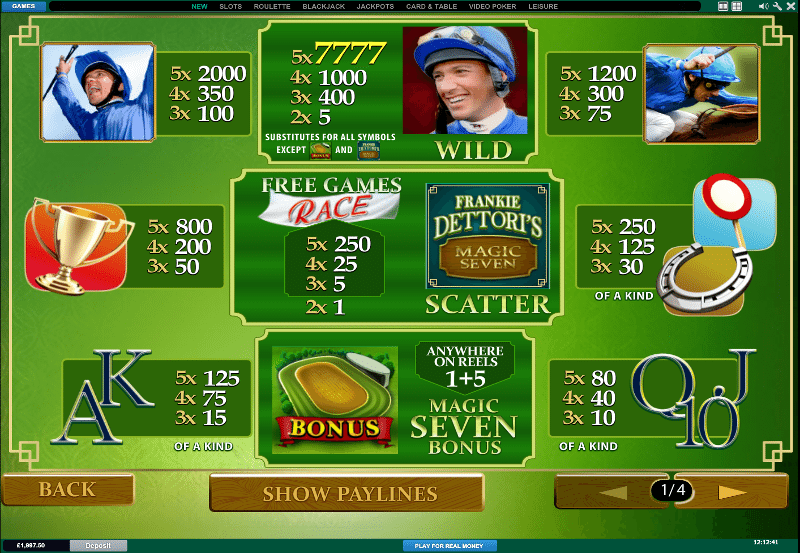 If horse racing is your thing, this is probably one chap that needs no introduction. If it’s not your thing, chances are you won’t be particularly bothered about a slot based on his legendary 1997 Ascot performance. Horse racing slots aren’t exactly thin on the ground and it has to be said that at first glance, Frankie Dettori’s Magic Seven doesn’t come across as particularly impressive. However, if you’re willing to look past the undeniably mediocre visuals, the meat n’ gravy behind the scenes are far more impressive.

Courtesy of the folks over at Playtech, Frankie Dettori’s Magic Seven is a five-reel, 25-payline slot with a pretty extensive serving of special features and bonus games. The three-horse race bonus game in particular is a real hoot…again, if horse racing happens to be your thing.

All of the symbols (and visuals in general) have been ripped from the world of professional horse racing, along with the usual playing card values and a few special additions. You can set coin values from at little at 0.01 up to 1.00 and choose how many of the 25 paylines you want to play with. Round it off by choosing your bat value between one and ten, give your nag a playful pat on the backside and hit the button to begin the race!

True to its title, the biggest standard jackpot available from Frankie Dettori’s Magic Seven is a whopping 7,777X your wager, which can be yours if you line up five Frankie symbols in a row. Slightly more modest 10X payouts are on offer for landing three queens, jacks or tens in a row, which still isn’t a bad takeaway.

Along with being the jackpot symbol, the man himself is also the wild – meaning that two or more on any winning payline guarantees you a cash prize. The scatter symbol takes the form of the ‘Frankie Dettori’s Magic Seven’ symbol – two or more again being good for a guaranteed win. Three scatters will take you to the ‘Free Games Race’ where your position will see you coming away with 35, 25 or 10 free spins.

There’s also the ‘Magic Seven Bonus’ game that can be accessed by landing the ‘Bonus’ symbol on the first and fifth reels. It’s then a case of choosing hidden perks and prizes until the ‘collect’ symbol appears, at which time you take home all you’ve accumulated so far. You can also gamble every win on a higher-or-lower card reveal, which will result in your winnings being doubled or snatched from your grasp.

As already mentioned, Frankie Dettori’s Magic Seven is a genuinely excellent slot, though it is unlikely to appeal to those with no interest in horse racing. Which is a shame, as in terms of features and unique functionalities it really is right up there with the best of them!