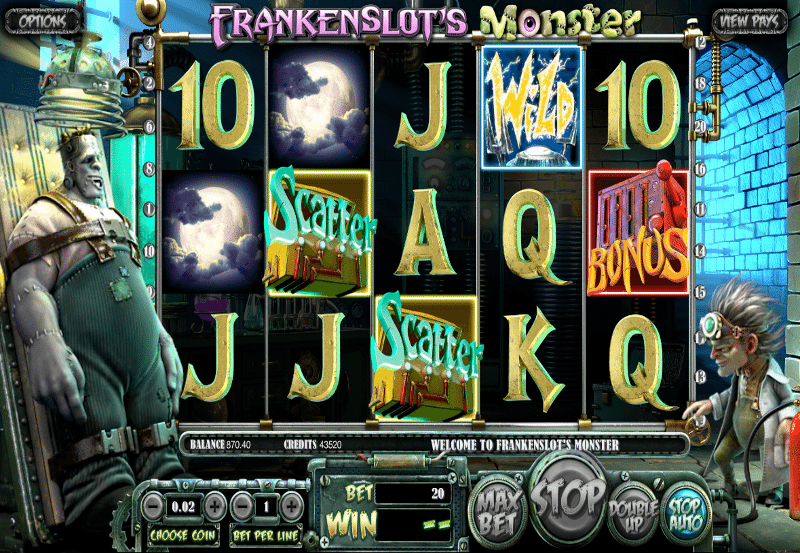 Part of the latest range of 3D slots from the wizards at Betsoft, Frankenslot’s Monster is based around…well, do we really need to tell you? We’ll assume you know the story of Frankenstein and his monster by now, so we won’t bore you with a lesson in classic literature.

What immediately stands out about Frankenslot’s Monster is the clearly intensive time and effort that have gone into the visuals. The (rather insane looking) doctor is there to the side of the screen, while at the other end is his creation, bound to a bench and looking rather odd. And they’re both clearly out to support you, becoming no less than your own personal cheerleaders when you hit a big win.

Along with the usual playing card values, symbols feature all the weird and wonderful bits and pieces you’d expect from a monster mash like this. Eyeballs, electronics, the moon, the doctor and the monster himself are all present and correct. Coin values vary from 0.02 to 1.00, you can bet between one and five coins per line and there are 20 fixed paylines in play at all times. When you’re ready, throw the lever and stand back!

Grizzly he may be, but if you’re lucky enough to come face to face with five of Frankenslot’s Monsters, you’ll be looking at a win worth 500X your bet. The ‘10’ playing card value has the lowest price value, paying out 5X your wager if you hit three in a row. There’s also a wild symbol that can take the place of all other symbols, with the exceptions of the scatter and bonus symbols.

Scatter will net you an electrifying eight free spins if you’re lucky enough to land three of them in any positions on the reels. More free spins can be triggered during your free games, while up to three symbols will turn wild with every free spin.

The main bonus game opens up by landing three or more of the bonus symbols at any positions on the reels. This basically sees you taking control of the electronics and giving Frankenslot’s Monster the shock of his life…or death…or both! His reaction to this jolt will determine how much cash you win, which could be very little or a hell of a lot!

And of course, there’s always the option of going for a double-or-nothing gamble after every win, which all comes down to the flip of a coin. Contrary to the norm however, you can choose to bet all your winnings on the coin-toss or just half.

Critics argue that Frankenslot’s Monster looks better than it plays, which is sort of right but also quite misleading. If it was to play as good as it looks, it’d be by far one of the best works from Betsoft to date. Instead, it’s a game that looks outstanding and plays pretty great too.