An Evening with Holly Madison Slot 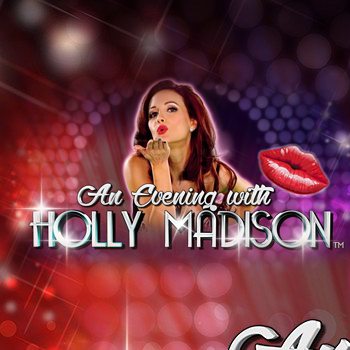 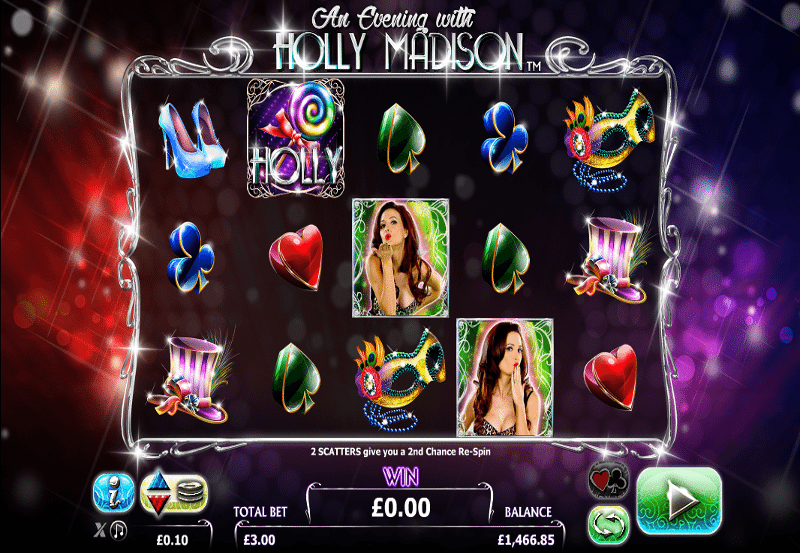 It’s probably fair to say that An Evening with Holly Madison was not designed primarily with female gamers in mind. Something of a cheeky (and some might say borderline cheesy) take on the usual 5-reel, fixed 25-pay line online slot, the folks at NextGen Gaming clearly decided that the time had come to inject a little Playboy magic into their collection. Not that An Evening with Holly Madison is in any way affiliated with the Playboy brand…we thought it might be a good idea to point that out right now! Nevertheless, it was Hugh Heffner and the fact that she famously insured her ‘assets’ for $1 million that saw her become a household name with her own TV show.

Which all considered probably means we don’t have to tell you a great deal about the theme, the visuals to expect or generally the way An Evening with Holly Madison is put together. The lady of the hour is present and correct to say hi, along with lucky dice, stylish cars, ball masks and of course…shoes.  Well, what else would you expect? There are a total of 25 pay-lines to play for and core and sizes start from 0.01 and can be increased to a maximum of 2.00.  When you’re sufficiently suited, booted and ready to take on anything she’s likely to throw at you, hit ‘spin’ and begin your evening of excitement…perhaps.

While there isn’t quite a million-dollar payout up for grabs, there is still a solid $2.000 jackpot available if you’re lucky enough to hit five blackjack symbols.  By contrast, you can expect to take home a slightly less thrilling 5X win if you hit three spades or clubs.

Holly makes another appearance in the form of wild symbols – all three of them. They are confined to the three middle reels and are good for replacing any symbols, with the exception of the scatter. If you’re really lucky, Holly might send a cheeky wink your way when you hit a wild, which results in the entire reel been covered by the wild.

The scatter symbol takes the form of a tastefully named ‘Holly lollipop’, of which you’ll have to come up with at least two at the same time to take home a prize. You also gain access to the ‘Rockin’ Re-Spin’ feature at the same time.  As for the pretty staying ‘Free Games Feature’, the entry fee is three scatter symbols after which it’s a case of stacking up the new ‘kiss’ symbol in hope of making it all the way to the ‘Photoshoot Bonus’.

On the whole, An Evening with Holly Madison is a bit of a mixed bag. Though clearly aimed at men, much of the femur with regard to the features and bonus rounds involve decidedly girly exploits like picking dresses and getting ready for photoshoots. Nevertheless, An Evening with Holly Madison serves up one rather enormous prize in the fact that the gameplay is actually outstanding.  Not only this, but the visuals are simply superb, the soundtrack is excellent and there are far more features than you might expect.

Very surprising – and all in a good way!