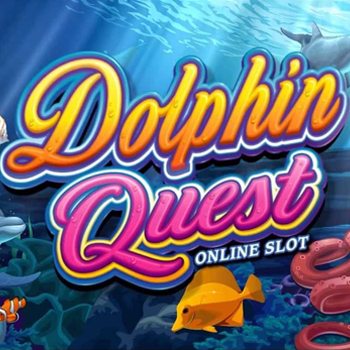 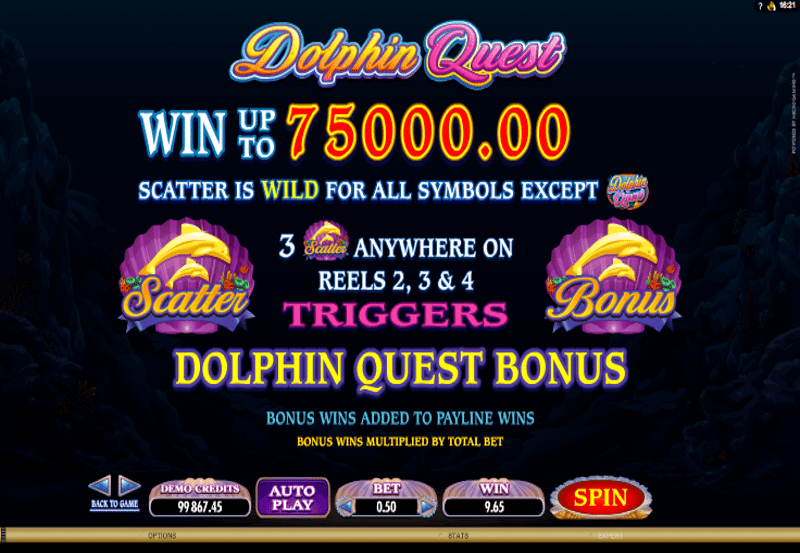 If you’ve been looking for a way of diving into the deep blue for the adventure of a lifetime without getting wet (of course you have), you’ll be pleased to hear that Microgaming has just the slot for you. Well, technically speaking it’s not the first of the series to deliver an ocean-going experience – it’s just that Dolphin Quest happens to be leagues ahead of its predecessor.

Cast your mind back a few years and you might remember Dolphin Coast. Boasting no less than 3,125 pay-lines and generally gorgeous presentation, it’s hardly surprising that it was an instant hit. Nevertheless, by the time 2013 rolled around, this once-fabulous flipper was beginning to show its age, prompting Microgaming to put it out of its misery…so to speak. And while Dolphin Quest isn’t strictly speaking designed to be a sequel to Dolphin Coast, it’s nonetheless the only slot currently available from Microgaming with a dolphin as the star of a show.

Of course the big question is – what does Dolphin Quest bring to the table that its departed sibling didn’t? Well, first of all things it is certainly being streamlined when it comes to pay-lines. This time around, what we’re looking at is a four-row, five-reel online slot with a comparatively modest 50 pay-lines.  That being said, Dolphin Quest certainly delivers the goods in other areas – overall presentation and graphic prowess for example are being taken to a whole new level.

Unsurprisingly, it’s a decidedly fishy theme from top to bottom. Along with the dolphin that’s set to become your new best friend, you’ll also encounter more than the odd octopus, turtle and hermit crab along the way. Choose the size of the coin you’d like to wager between 0.01 and 0.50, select how many coins between 1 and 5 you’d like to put on the line and then choose how many of the 50 pay-lines you want to play for. Then it’s just a case of hitting the ‘Spin’ button and praying for a porpoise payout!

During normal play, the smallest win will net you 5X your coin size and can be scored by hitting three puffer fish, seahorses, lion fish, shoals of fish or hermit crabs. Right at the top of the table and promising much bigger payouts is the ‘Dolphin Quest’ logo – hit five of these and you’re looking at 2,500 X your bet.

The Dolphin Quest symbol also happens to be wild, which means it can be used for any other symbol with the exception of the scatter symbol. The scatter symbol itself will not pass you by, taking the form of the word ‘Scatter’ with two gold dolphins jumping over it. You will be rewarded with the Dolphin Quest Bonus if you hit scatter symbols on the three middle reels, during which waterfalls replace these central reels. A cascade of numbers keeps on falling until you press ‘Stop’, as which time the middle three are added together to determine your prize.

On the whole, there is certainly a lot to say about the way Dolphin Quest is put together visually, but it really doesn’t bring anything spectacular to the table in terms of game play and features. It’s definitely worth checking out – just don’t expect to be particularly blown away by the action itself.