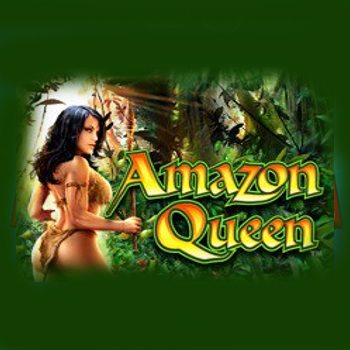 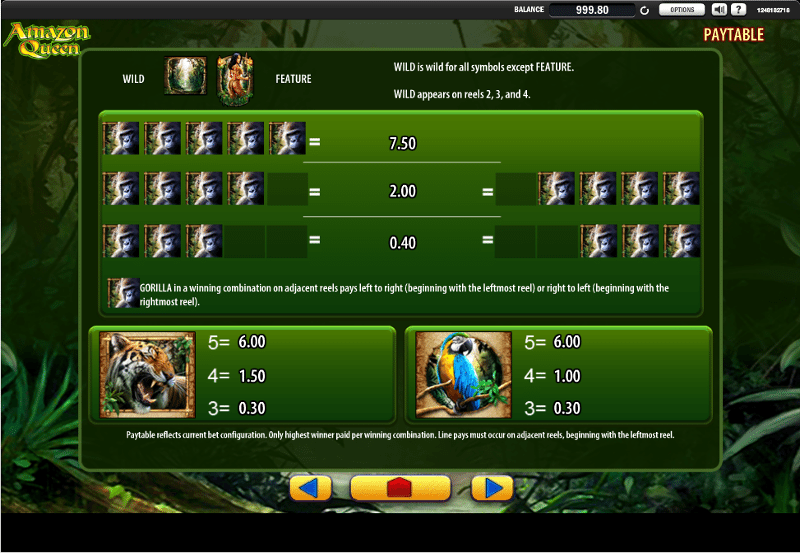 Critics have cast aspersions on the geographical accuracy of Amazon Queen, given that fact that its creators seem to think tigers live in the jungle. Back on planet Earth however, those with an interest in quality slots know that accuracy doesn’t count for jack in this realm – it’s all about gameplay.

As it’s usually the case with WMS slots, you can either bet manually on as many of the 20 paylines as you like with coin values between 0.01 and 3.00, or use the ‘quick bet’ option and have the machine take over. It depends how flush or frugal you’re feeling at the time…or lucky, for that matter. As you’d expect, there’s a sizeable contingency of jungle friends to meet along the way – everything from parrots to snakes to…yes, tigers! Line up three or more identical symbols from the left-hand reel and you’re in the money.

The lowest payout this particular Amazon Queen offers is 5X your bet, which can be yours by hitting three diamonds or clubs. If you’re lucky enough to land five gorillas in a row, you’ll be looking at a whopping 750X your wager. What’s also great is that to improve your chances of taking home the top prize, gorillas win-lines work both ways – from the left reel and the right reel.

There are two wilds to play for which are restricted to the three middle reels only. The standard wild symbol is the jungle scene, which is valid for all other symbols. There’s also the Amazon Queen wild, which turns the symbols immediately below and above wild as well. Her Highness also happens to be the game’s scatter symbol, meaning that if she turns up three times anywhere on the game board, you’ll be rewarded with 10 free spins. Four Amazon Queen symbols on an of the reels and its 25 free spins, while five appearances at the same time and you’ll be playing with a whopping 100 free spins.

If you find something decidedly familiar about the way Amazon Queen does business, there’s a pretty explanation. Inside and out, it’s basically an identical copy of Kronos – the WMS slot that followed Zeus. Not that this is a bad thing as these both happen to be slots we’ve enjoyed spending time with. It’s just that if you were looking for something different, there’s really nothing new with Amazon Queen. Still, always worth a spin or two!