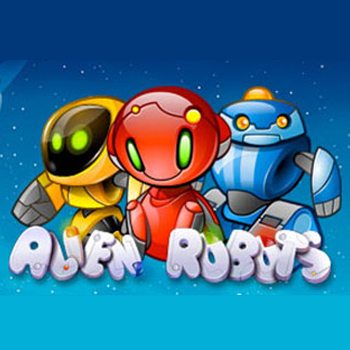 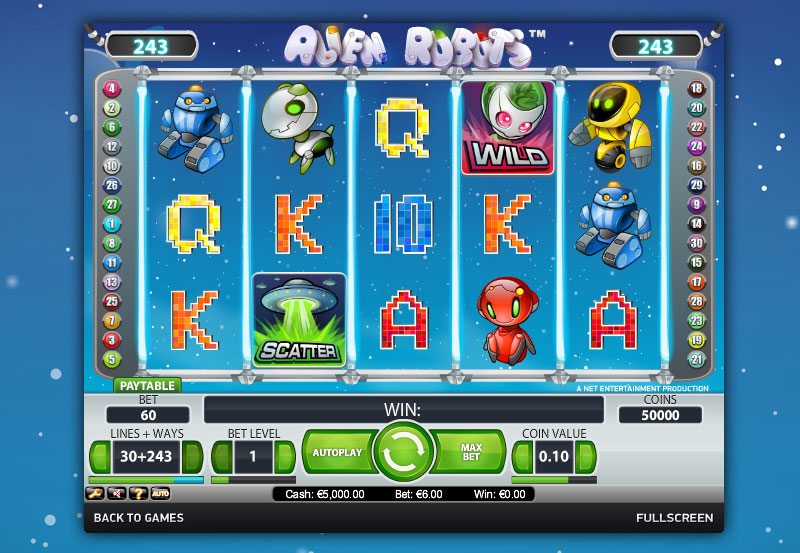 Not content with choosing one of the two most popular sci-fi themes, the alchemists at NetEnt decided to fuse both together…resulting in the creation of Alien Robots. That’s right – robots from outer space. But what’s rather unique about these little guys is that instead of heading our way with the intention of enslaving humanity or blowing up the planet just for giggles, they’re friendly. And not only are they friendly, they’re here to at least attempt to help you take home a cash prize or two!

Boasting a generous 243 paylines, Alien Robots is a cool and quirky take on the standard five-reel slot formula. One thing that immediately stands out about Alien Robots is the way in which there are two different game modes to choose from. There’s the full 243-paylines mode that costs 2X your wager, or the alternative 30-lines mode. When you do the maths on these options, you have to wonder why anyone would bother with the latter – it just doesn’t make sense!

You’ll be greeted at the door by a bunch of undeniably cute robot symbols, along with the usual playing card values from 10 to Ace. Three or more symbols in a row lined up from the left will win you a prize, while coin values start from just 0.01 and go as high as 0.50.

When it comes to big wins, they certainly have the potential to come very big indeed with these guys. Suffice to say the red robot could be your new best friend – lining up five in a row will (depending on the play mode you chose) net you 1,500X your wager or a staggering 10,000X your bet. At the slightly more modest end of the scale, three jacks or tens are good for 5X or 10X your wager, again depending on the mode you select.

The wild symbol appears in the form of a robot with pink eyes – good for serving as any symbol in the game apart from the scatter (see below). If you’re playing with free spins, any wild you hit will turn the entire reel wild as an added bonus.

As for the scatter, it’s the flying saucer should be on the lookout for – three will score you 10 free spins, four will see you spinning 20 times for free while landing five at any position ups the ante to a whopping 50 free spins.

What else? That’s it – and to be honest it’s the simplicity of Alien Robots that makes it a winner in our books. NetEnt produced and launched Alien Robots specifically for those who simply cannot be bothered with all the bells and whistles, instead preferring simple yet addictive gaming with solid prizes to play for. And in these fields, Alien Robots ticks all the right boxes in spades!